Restaurants and commercial kitchens around the world can easily open in non-traditional sites by using Trapzilla Grease Interceptors and Solids Separators as a compact grease interceptor alternative. These products provide long-term value to customers by meeting regulatory codes and protecting internal plumbing, while taking up much less space than a traditional solution. See how these customers overcame grease interceptor challenges with Trapzilla.

Jason’s Deli Puts a Lid on a Persistent Problem

Problem: A Jason’s Deli location in Virginia had a steel grease interceptor located in their back access alleyway. The steel lid covering the grease interceptor was weak and had to be replaced several times. If the company didn’t fix the problem permanently, this costly annoyance could become even more costly as delivery trucks regularly drove over this unsturdy, non-traffic rated lid. The steel interceptor needed replacing, but the company wanted to minimize the time required to remove the old grease interceptor and install a new one.

Solution: Jason’s Deli discovered a Trapzilla would provide grease capacity equal to the old steel interceptor in less space. This means it would fit into the existing hole without extensive additional excavation. Additionally, using Trapzilla’s One-Pour system made installing the traffic rated solution quick and efficient.

Result: The total cost of product plus installation was competitive with a traditional concrete interceptor. Since the Trapzilla with the new traffic-rated lid was installed in late 2015, the Falls Church location is back to focusing on serving its customers.
Click below to read more. 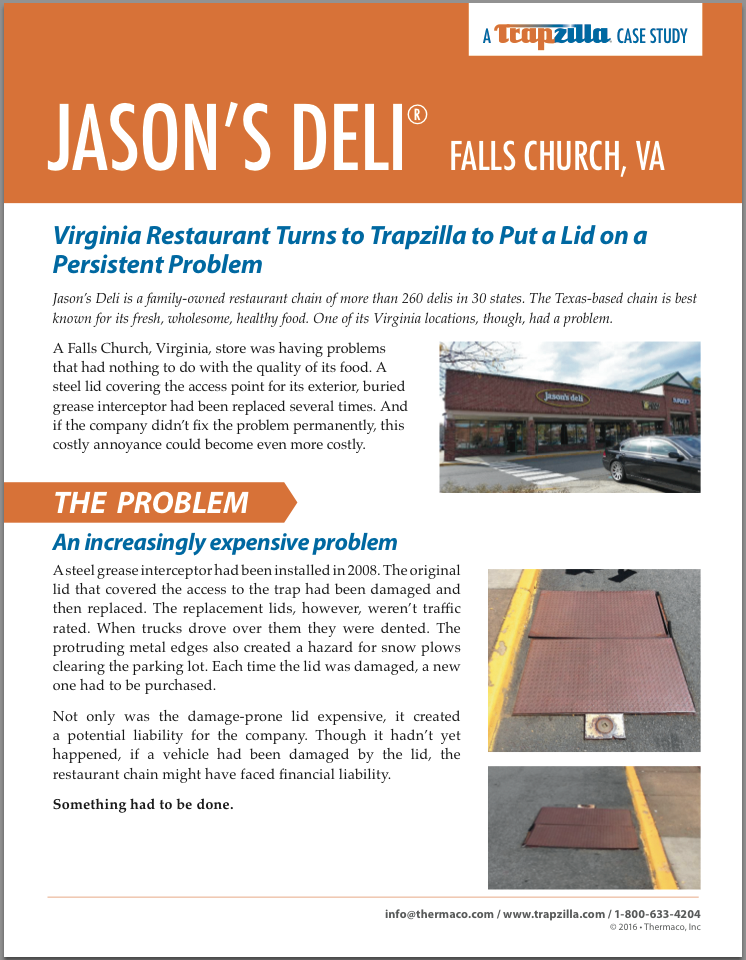 Dealing with grease waste is a concern for every foodservice operation, see how it became a non-issue for a Potbelly Sandwich Shop.

Problem: Charles Tanner, Senior Director of Construction and Facilities for Potbelly, explained: “We built a shop in Issaquah, Washington where we were required to use a 1,500-gallon grease interceptor out in the parking lot. Due to the sewer height under our space being too high, we were going to have to dig a trench of literally 300 feet and place the grease trap out in the parking lot.” This was going to result in a very expensive and time-consuming installation.

Solution: Tanner discovered that due to its compact footprint, Trapzilla could be installed inside the restaurant’s kitchen as opposed to 300 feet from the building. The cost of installing Trapzilla was “quite a bit less” than the traditional concrete vault because it’s a one or two-man installation. Trapzilla met the City of Issaquah’s stringent requirements, making it a win-win for all concerned.

Result: Tanner says, “We are happy to have a product that works great, gets city approval and saves us a ton of time and money!” The savings for an operator like Potbelly can add up to tens of thousands of dollars with Trapzilla’s lower installation costs and durability.
Click below to read more. 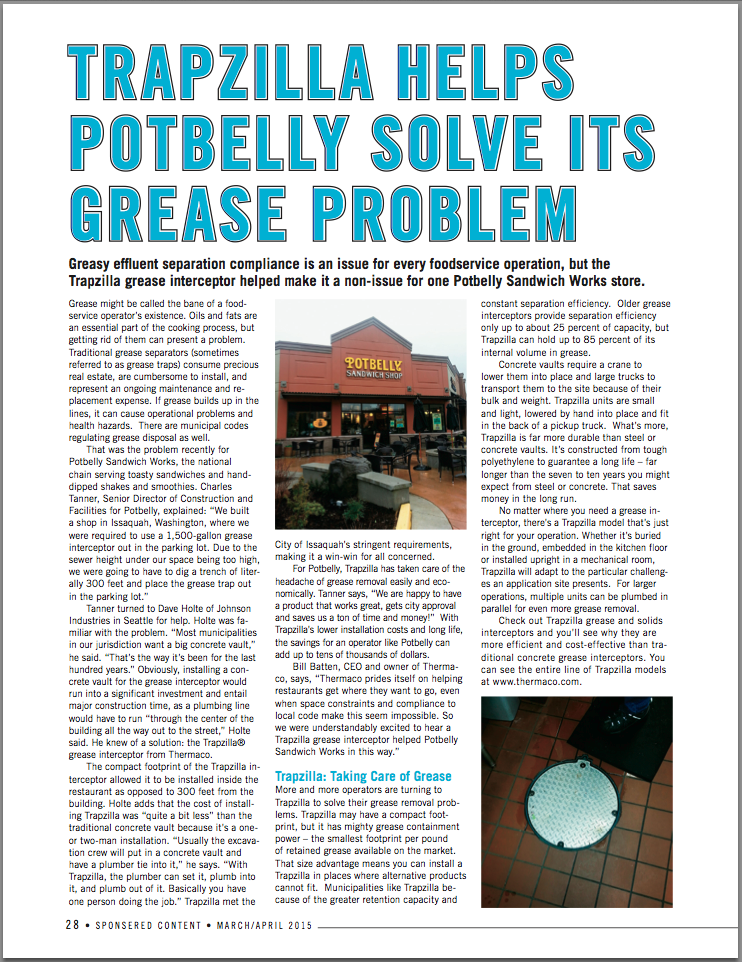 Problem: One of Dell’s corporate buildings in Ireland installed a metal grease trap 10 years ago. The combination of moisture and acid that naturally builds up in grease interceptors was corroding the metal trap. As the trap starts to degrade, there is a strong possibility that grease is entering the local sewage treatment system, putting Dell at risk for regulatory issues.

Solution: Dell knew they had to fix this problem and learned about Trapzilla’s durable plastic structure which is resistant to the corrosive effects of acid. Its unique design lacks corners where waste and bacteria that produce acid tend to accumulate. This design also allows Trapzilla to hold more than 85% of its volume in grease, compared to traditional interceptors that hold 25% of its volume. This means, Trapzilla can hold more grease in less space. Since pumpers in Ireland charge by volume, Dell would save money on pumping costs.

Result: Due to its small footprint, the Trapzilla unit was installed inside the old metal trap. Resulting in a much quicker, less expensive, and less disruptive installation process. Dell is back in full compliance with local sewage pretreatment regulations as well as saving money on its quarterly pumping service.
Click below to read more. 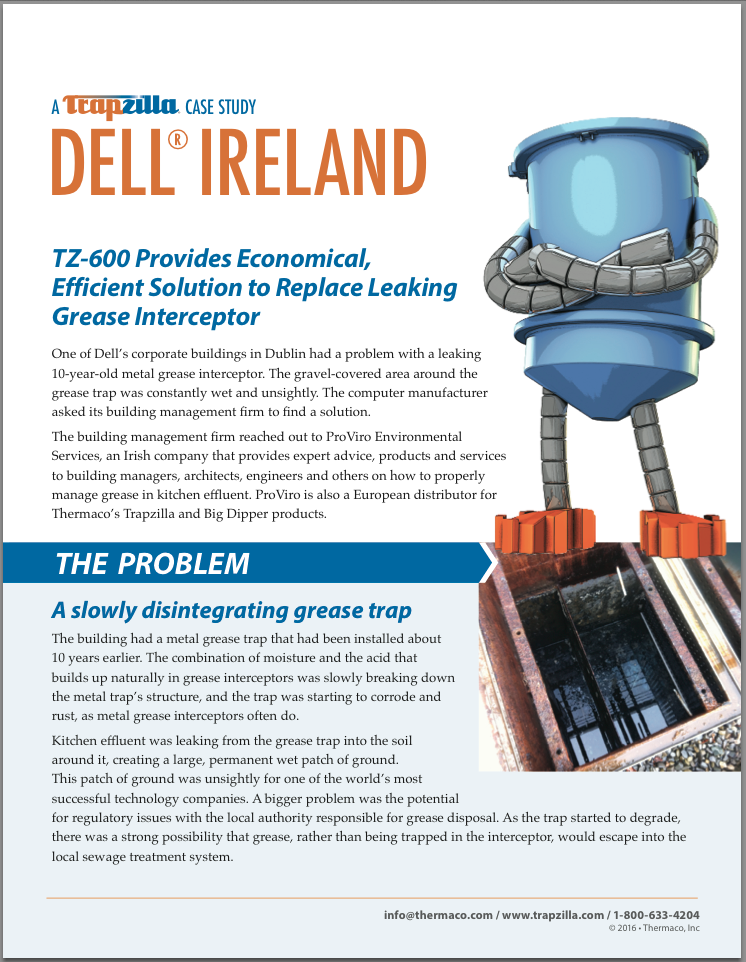 Solution: Install a Trapzilla TZ-600 and test the conditions inside the grease interceptor to observe any change in acid levels and effluent discharge. 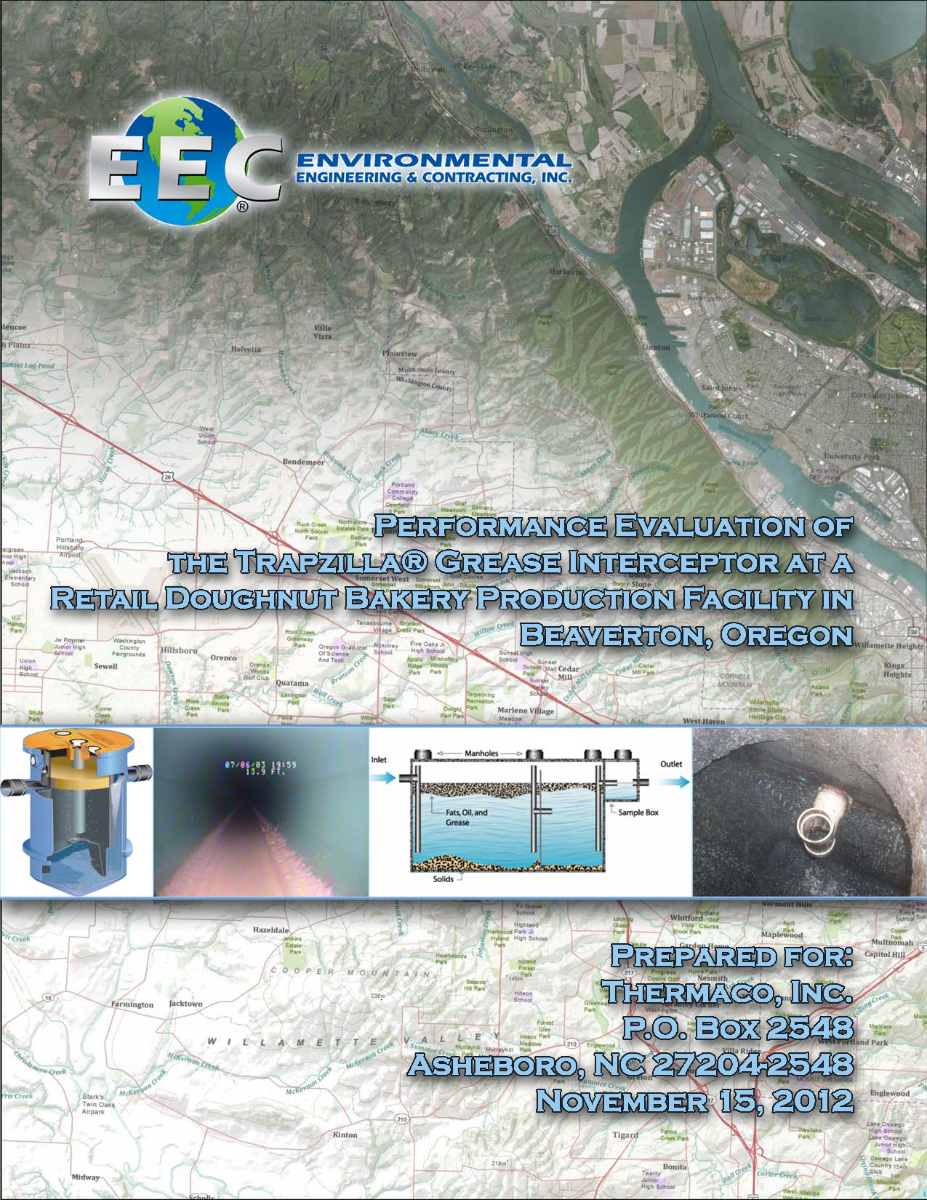