Control Can Be Elusive in Pretreatment’s Three-Legged Stool of grease management and compliance.

In the late 1980s, The Narragansett Bay Commission (NBC) provided a great example of how to maximize control when it carried out one of the most effective Pretreatment programs I've seen in my career. It had to implement an audacious pretreatment program to reduce downstream wastewater treatment plant loadings sufficient to meet the EPA’s first Marine Estuary Guidelines.

The NBC was in a tough spot. It had to meet significantly stricter effluent discharges to the Narragansett Bay Estuary while not having the financial resources to re-fit its treatment plants accordingly. So the NBC went to work implementing performance limits and field monitoring nearly all classes of commercial establishments. From this monitoring and assessment outliers were discovered.

The NBC then used the carrot-and-stick approach to bring those outliers into compliance. However, some sites pushed back and failed to take steps to meet the newly implemented requirements.. Would the NBC back down and risk failure or ratchet up the pressure on sites in violation? No, the NBC chose to ramp up the pressure, which led to issuing large fines to non-compliant national account chain sites. Additionally, the NBC made sure publicity accompanied the hefty penalties assessed to the offenders (one national restaurant chain was fined $50,000 and written up in the regional newspaper).

These strong and clear actions led to herd instinct taking place seemingly overnight. As a result, commercial facilities throughout the system got serious about implementing new technology, carrying out proper maintenance, and giving management attention to ensuring Best Management Practices were happening every day/night in their commercial enterprises.

The result? The NBC not only met its goal. It led to lower than required effluent numbers to the Narragansett Bay Estuary. Today its work illustrates how to make the most of the varying control you have over each of the 3 legs on the 3-Legged Stool of grease management and compliance: 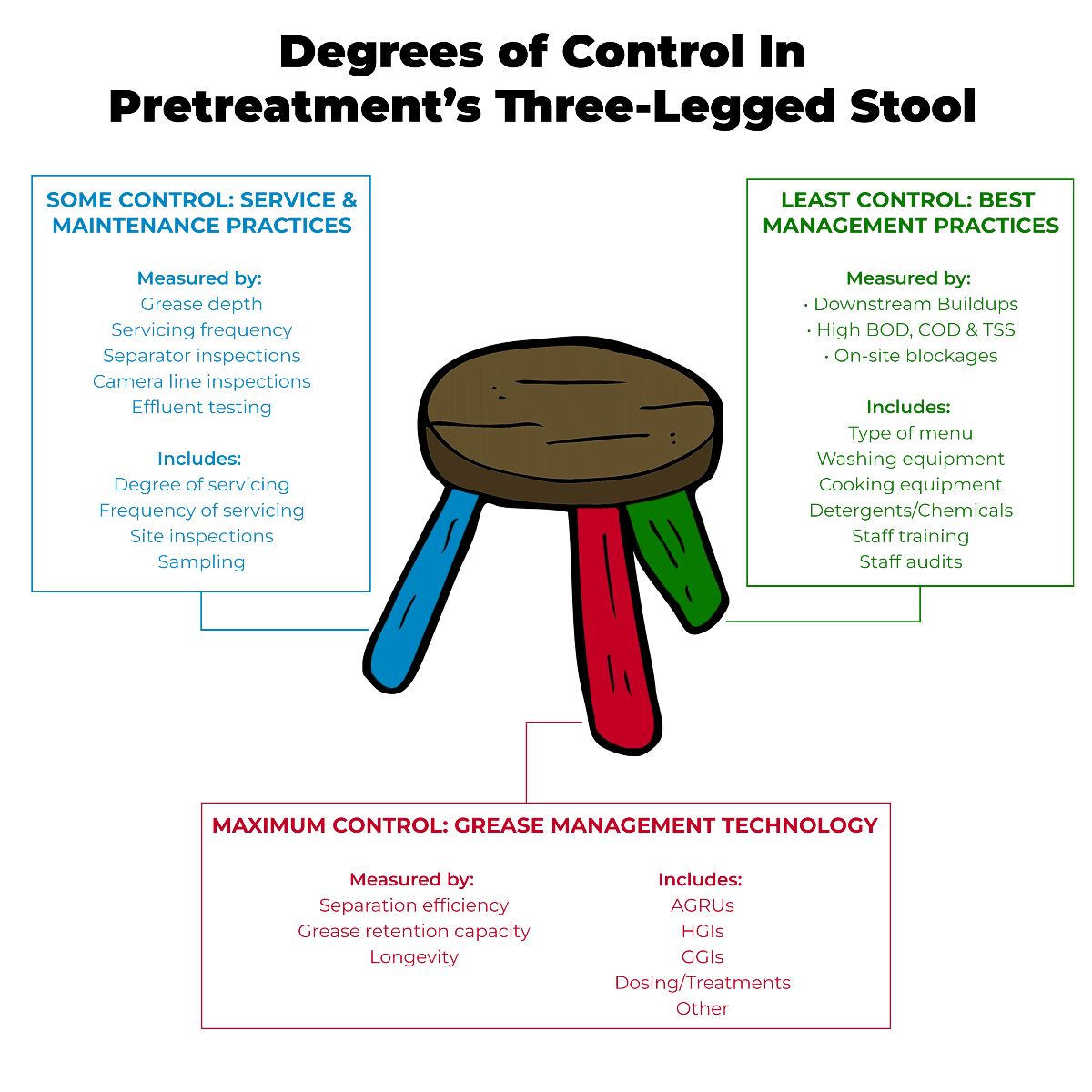 The Technology Leg: Where Your Control is Greatest

Control is elusive, particularly where governmental requirements meet private commerce realities. As a pretreatment official do you know where you have maximum control? Lesser control? Least control?

The EPA has utilized numerical targets -- not equipment or system requirements -- for managing effluent objectives. Numerical hurdles are “Performance Standards.” Design parameters such as type of pretreatment system, size of the device, location of the device, servicing frequency, and other stated aspects are “Prescriptive Standards.”

Pretreatment authorities have inched closer and closer to defined Prescriptive Standards and farther from Performance Standards. The shift is a natural consequence of complexity management. Managerially, it is easier to impose Prescriptive language onto a new restaurant facility looking to begin operations than to tell them their discharge must not exceed 200 mg/l and to expect them to find a way to meet that objective consistently.

Everyone feels better knowing what the expectations are with Prescriptive Standards. The “Everyone” includes:

This is the point of maximum happiness for the sewer district, the specifying engineer/architect, and the restaurant operator. This is also the point of maximum control by the sewer district over that site. Once the site starts operating, the other two legs of the Pretreatment Stool come into play. The Maximum Control Point is in the rearview mirror, and the Pretreatment Authority has diminishing control over a facility.

Nearly all of the remaining Prescriptive Steps available to the Pretreatment Authority involve aspects of the Servicing & Maintenance Stool Leg, where actions like setting minimum pumping frequency can be recommended or imposed. The Servicing & Maintenance Leg is also where the Pretreatment Authority carries out site inspections, effluent sampling, and other monitoring activities to ensure effective pretreatment is occurring.

Servicing & Maintenance: Where Control Is Limited

Your control over the Servicing and Maintenance leg is limited because it takes scarce time, energy, and money to conduct on-site visits, camera inspections, grease separator retained grease measurements, and so forth. This is why sewer districts usually default to management by exception (those exceptional sites that have done significant and provable damage to the sewer system) and carry out enforcement of the other 98% of sites via periodic inspections of a small subset of that population.

Unless the city/sewer district has put considerable funding into sufficient staffing, the Service & Maintenance Leg increasingly relies on manifests/records to show that sites have been serviced. The big rubs are:

It is easy to see the Pretreatment Authority has significantly less control in the Service & Maintenance Leg.

Facility Best Practices: The Wobbly Leg of the Stool

But wait, there is a third Pretreatment Stool Leg -- Facility Best Management Practices. The gunk coursing down the facility’s pipes is determined by the menu, the cooking equipment, the ware washing equipment, the cleaning practices, the detergents, the cleanliness/sanitation aspects, and the facility’s managerial oversight. The Pretreatment Authority has essentially no control over a facility’s Best Management Practices other than to offer staff educational assistance or impose charges/fines for effluent limit violations or downstream sewer system costs. In both cases, the Pretreatment Authority must spend considerable energy and cost.

The above information explains why the focus of many Pretreatment Authorities skews toward the Technology Leg. It is straightforward and offers procedural clarity. After a commercial facility is built to approved plans and goes into operation, the Technology Leg is no longer involved. From that point forward, the Pretreatment Authority hopes the plan-approved Technology and the defined/suggested Service & Maintenance guidelines will keep the facility’s effluent within community guidelines.

Like so many things, there is an underlying majority/minority rule at work in the background. For example, one study conducted about ten years ago in a major US city found 59% of the restaurant/food service facilities sampled met the sewer district’s FOG effluent number (less than 150 mg/l) and 41% did not. This city has since required new and existing sites to install significantly enhanced grease separation equipment with nearly all sites installing significantly more retention capacity than previously required.

Our nearly 40 years of field experience tells us there will still be sites afterward in that city not meeting the 150 mg/l effluent limit because of issues in the Facility Best Management Practices Leg. The reasons are many, including fat/oil/detergent emulsions created in the facility cannot be separated by downstream separators and unintentional issues caused by low water turnover leading to hydrolysis/bacteria break-down of retained fats into soluble fatty acids.

Additional concerns are hydrogen sulfide levels rising because of super-sized separator systems. Consequences -- whether intentional, unintentional or simply unknown -- will be exacerbated by the facility’s Best Management Practices zone thwarting the original good intentions of the Pretreatment Authorities.

What Can Be Done to Improve Pretreatment Authority Control in the Service & Maintenance and Facility Best Management Legs?

As counselors say, “The first step to a full recovery is acknowledging there is a problem”. The problem is Prescriptive measures can only go so far.

Performance measures followed by enforcement (including fines, charges, and legal actions) and educational outreach has often been the pathway in high-performing pretreatment programs. The carrot-and-stick method has worked well in high-performing programs over the years. It worked well for the Narragansett Bay Commission in the 1980s and will likely work well for sewer districts in the 2020s, too.

As Peter Drucker famously said: “If you can measure it, you can manage it.” Applying knowledge of how Pretreatment’s Three Stool Legs realistically function is fundamental for ensuring your community’s members meet their individual effluent requirements and the shared enjoyment of a properly functioning community sewer system.