If you read our post on how emulsions can lead to fats, oil and grease (FOG) escaping a grease interceptor, you know that some grease will inevitably get into the wastewater system.

While the amount of grease getting through each day doesn’t seem that large, it constitutes what many feel is the greatest threat to the world’s sewer systems.

You might wonder why it would be a problem if the fats and oils have been emulsified — broken into tiny particles — through physical emulsion or, via soaps and detergents, chemical emulsion.

After all, shouldn’t emulsified grease just flow through the wastewater system until it can be treated at the treatment plant? Unfortunately, emulsified grease, once it’s in the sanitary sewer system, doesn’t stay emulsified.

And that’s where the problems start.

As you might guess, there’s a lots of stuff flowing through a typical sewer system. Besides water and grease, you’ve got soaps and detergents, biological waste of various sorts, food scraps, toilet paper and all sorts of other substances that get flushed into the sewers.

The solids formed when grease emulsions and metal ions meet build-up gradually and relentlessly inside sewer pipes until the flow is constricted. Then solids start to plug the remaining space. Eventually an unwanted, unsanitary sewage spill occurs in someone’s neighborhood, or worse still, someone’s basement. 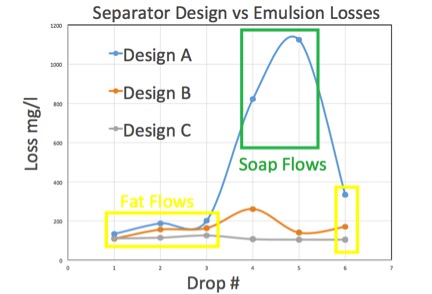 It turns out that grease interceptor design and placement has a major impact on how much emulsified grease escapes into your sewer system.

The key to keeping emulsified grease out of wastewater systems is reducing the amount of emulsification that occurs. There are two places to do this:

1.  In the kitchen, where point-source interceptors and best practices (such as wiping greasy dishes before washing them) can reduce the amount of grease that gets emulsified and help segregate grease before it hits the sewer system. Thermaco’s Big Dipper system, which is often plumbed to three-compartment sinks in commercial kitchens, can tackle this challenge.

2.  In the grease trap itself. When soapy water enters a grease interceptor, design features, such as horizontal baffles can help reduce the amount of stored grease that gets emulsified due to excess detergent and soap in the wastewater. Trapzilla interceptors are designed with baffles and other features that reduce the amount of retained grease that might come in contact with soaps and detergents, causing them to emulsify.

But food service establishments can choose better grease interceptors and keep a lot more grease out of the wastewater system.